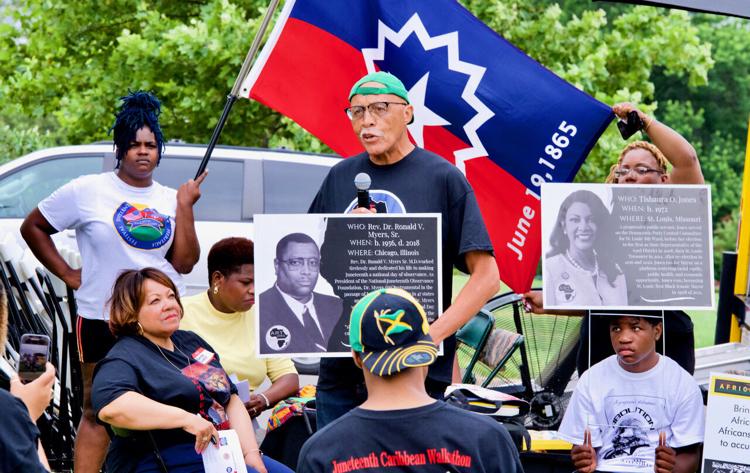 By Dana Rieck Of The St. Louis American

On Saturday, James Tucker made sure attendees of the inaugural Juneteenth Caribbean Heritage Walkathon knew of the work and leadership that the late Rev. Dr. Ronald Myers put in during his lifetime to make Juneteenth a national day of observance.

Juneteenth, which commemorates the day that over 10,000 African American slaves heard news of their freedom, was made a federal holiday after the House voted overwhelmingly in favor of the move on Wednesday and President Joe Biden signed the bill into law Thursday afternoon.

Tucker said the three states that did not recognize the day were Hawaii, South Dakota and North Dakota.

“Most importantly, though, if Biden is sincere, this holiday can unite all Americans — people will interact and learn.” – James Tucker, president of Africans Rising Together 2063

But Tucker, who is the president of Africans Rising Together 2063, also noted that, in his opinion, President Joe Biden’s decision to declare Juneteenth a federal holiday is a step backward for the Black community.

“My position is that it’s a step backward for African Americans because the only people who will benefit from this legislation will be the descendants of slave owners,” he told The St. Louis American, noting that the revenue this holiday generates from things like hotel rooms and travel will go to white-owned companies that do not invest back into communities.

Even so, Tucker has been involved in the effort to nationalize Juneteenth for 30 years and moved to the area a few years ago. In his observations, the struggle to get Juneteenth nationally recognized was a gradual progression of broader awareness.

“Most importantly, though, if Biden is sincere, this holiday can unite all Americans — people will interact and learn,” he said.

Which was exactly the goal of the first annual Juneteenth Caribbean Heritage Walkathon, put on by Africans Rising Together 2063. It included a family-friendly one-mile and three-mile walkathon path that featured biographical information about influential Black figures and information about the history and significance of Juneteenth.

Anita Santiago is a doctoral student at Ponce Health Sciences University – St. Louis and adjunct professor at Harris-Stowe State University. She was at the event Saturday morning representing the Association of Black Psychologists, a group founded in California in 1968 to address the problems facing Black psychologists and the Black community at large.

In her colleague Dr. Keisha Ross’ remarks during the event, the concept of Post Traumatic Slave Syndrome was mentioned. Santiago said Post Traumatic Slave Syndrome is a theory posited by Dr. Joy DeGruy to assist in explaining the etiology or origins of the adaptive behaviors displayed by Blacks/African Americans due to to impact of chattel slavery.

Santiago said it’s a phenomenon with quite a bit of research behind it.

“And what we’re starting to realize is there is a connection between what African Americans experience every day and some of the expressions of what we experience,” she said. “So, it sounds very similar to Post Traumatic Stress Disorder, but it’s a very different [experience].”

Also in attendance was St. Louis Mayor Tishaura Jones, the honorary chair of the inaugural event. In her remarks, Jones said she was happy that Juneteenth was given the honor it deserves.

“This is a time for all of us to reflect and learn the full history of this country,” she said. “All of the good, the bad and the ugly. Because we have to be honest with ourselves, if we don’t understand and know our history, we are doomed to repeat it.”

She also said it’s important to know the history of St. Louis within the broader context of the country.

“And it hasn’t always been pretty either,” she said. “So, we are still fighting against systemic policies that have ruled this city for generations and please know that as mayor it is my number one focus to make sure that we look at every policy, every dollar spent through a racial equity lens.”

Africans Rising Together 2063 is a nonprofit organization with a mission to educate people of African descent concerning the true historical significance of their experience, culture and contributions to the world.