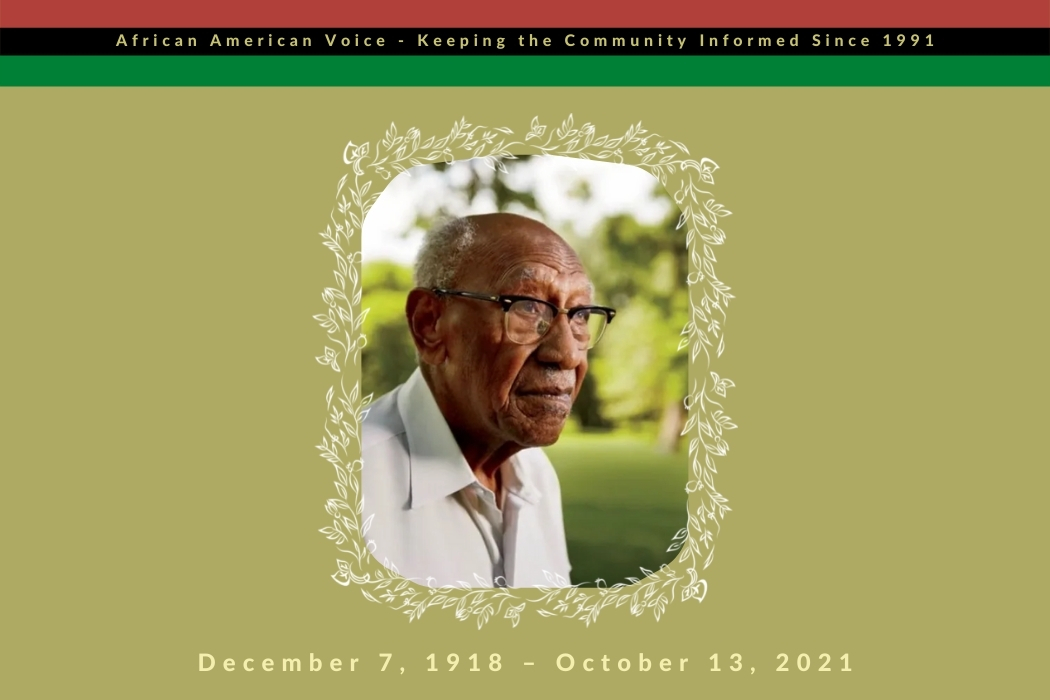 Timuel Black, a champion of civil rights and a renowned historian of Chicago’s Black history, died October 13. He was 102.

Funeral arrangements were incomplete by Crusader press time Wednesday, but his send-off will likely draw Chicago’s top leaders from across the city.

Nearly $117,000 had been raised for Timuel Black, the prominent Chicago historian and civil rights leader while he was in hospice care at his Kenwood home. Recent donations included $5,000 from Ariel Investments Chairman John W. Rogers, Jr.

That day, Lisa Yun Lee, one of several fundraisers for Black, announced that he was in hospice care at his Kenwood home and that funds were needed to cover his medical expenses as he struggled to recover.

In 2020, residents across Chicago attended a drive-by birthday celebration for Black as he waved from a chair on Drexel Boulevard. Less than two months before his 103rd birthday, Lee in her post on GoFundMe says she doesn’t know how much time “Tim has with us.”

Black was born in Birmingham, Alabama, on December 7, 1918. His family became part of the first Great Migration of African Americans from the Deep South, settling in Chicago in 1919. A nationally respected educator, political activist, community leader, oral historian, philanthropist, and philosopher, he has lived on the South Side since moving to Chicago over 100 years ago.

During his early school years at Edmund Burke Elementary School and DuSable High School, Black worked as a paperboy for the Chicago Defender. During the Great Depression, Black worked as a delivery boy for a local grocery store where he learned about community organizing. He would later organize the “Don’t Spend Your Money Where You Can’t Work” campaign in the 1930s. That campaign led to the creation of the Negro Retail Clerks Union. In the 1940s, Black was an active organizer of the Congress on Racial Equality (CORE), which worked to desegregate Chicago department stores.

During World War II, Black served in the U.S. Army and was awarded four battle stars and a Croix de Guerre, the highest military honor given to non-citizens by the French government. After the war, Black earned a bachelor’s degree from Roosevelt University and later obtained a master’s degree from the University of Chicago.

In 1955, after seeing Dr. Martin Luther King on television, Black abandoned his doctoral studies at the University of Chicago to become an active participant in the Civil Rights Movement. He served as the Chicago Chair of the historic 1963 March on Washington.

Black was one of the first African Americans in Chicago to challenge the “Regular Democratic Organization” and coined the phrase “Plantation Politics.”

He has run for public office several times and was a leader in the massive voter registration campaign that led to the election of Harold Washington as Chicago’s first Black mayor.

Black has published “Bridges of Memory: Chicago’s First Wave of Great Migration,” which chronicled the history of Black Chicago from the 1920s to the present.

In 2000, Black was the lead plaintiff in Black v. McGuffage, a lawsuit that charged the Illinois voting system with systemic discrimination against minorities. For his work, Black was honored by the American Civil Liberties Union as Civil Libertarian of the Year.

In 2008, Black received an honorary doctoral degree from his alma mater, Roosevelt University. In 2010, and again in 2015, Black traveled to the Netherlands and The Hague to be honored and lecture at the annual Dr. Martin Luther King Day Dinner of the United States Embassy.

In January of 2012, the Timuel D. Black Archive of Black’s documents was officially inaugurated and opened to researchers in the Vivian Harsh Collection at the Carter G. Woodson Regional Library in Chicago. That same year, Black was awarded the 54-year-old Benton Medal for Distinguished Public Service from the University of Chicago. He was the first Black person to receive this award.

In 2013, the city of Chicago honored Black with the inaugural Chicago Champion of Freedom medal for his local and national efforts in the Civil Rights Movement. At his centennial celebration in 2018, he was knighted by the French government with the French Legion of Honour Medal, the highest honor given by the French.

At Crusader press time the following statements had been released. More can be read online at www.chicagocrusader.com.

Saddened over the death of his dear friend, Rev. Jesse L. Jackson, Sr. Wednesday said Timuel Black, a professor, author, and community activist, was a great teacher and a tall tree in the civil rights forest.

He was a teacher par excellence. He followed students beyond the classroom. Tim taught them about politics and business science. He was a devotee of Dr. King’s work and those who worked on his staff.

Tim embraced us as his younger brothers and sisters. We all have a profound admiration for Tim Black. He is an icon of rare vintage…one of the rare teachers in the city of Chicago.

“My friend Tim Black spent every day of his life pouring his best into others. As an educator, a community activist, a civil rights activist, a political activist, a confidante, an elder, and a sage, Tim gave his all to all of us.

“One of my favorite memories of Tim was being present when he was telling Herbie Hancock about his relationship with Herbie’s father and seeing the glean in Herbie Hancock’s eyes as he told the story. Tim’s enthusiasm as an author and educator was inspiring, and his impact is utterly incalculable.”