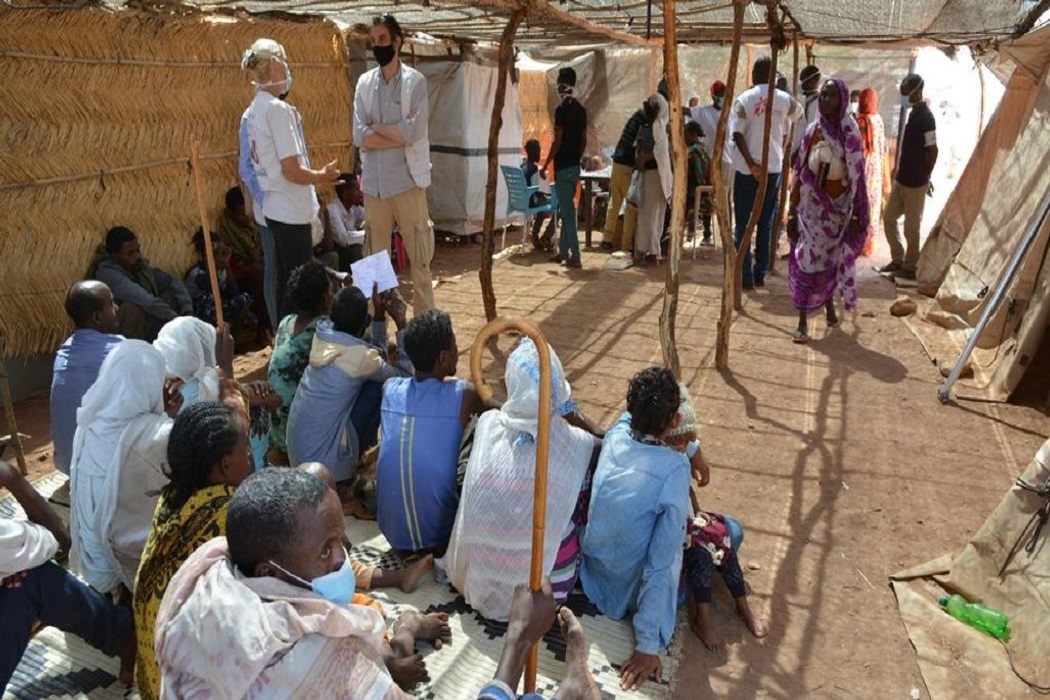 Hamdayet, though overwhelmed, offers a glint of hope to refugees in the desert of Sudan.

The small community of 600 people by the river on the border of Sudan and Ethiopia serves as a transit center where refugees are processed before being moved to permanent camps in Um Rakuba and Al Tanideba.

Since the most recent conflict in Ethiopia broke out in 2020, Hamdayet has become the main crossing point into Sudan. An estimated 10,000–12,000 refugees are in and around Hamdayet, where shelter, access to food, sanitation, and clean drinking water continues to be an issue. Most of the refugees, especially those without shelter, live throughout the village in the host community, while others live in the market area, seeking shelter in abandoned houses, shops, and huts.

Some 20,500 refugees had been relocated to the Um Rakuba camp as of last month, and more than 17,000 refugees have been moved to the camp in Al Tanideba.

“More than 61,200 Ethiopian refugees have crossed into East Sudan” as of Feb. 14, the U.N. Refugee Agency reported. “UNHCR and partners continue to establish refugee community structures at all sites.”

Jean-Nicolas Dangelser, head of mission for Médecins Sans Frontiers – MSF (also known as Doctors Without Borders) Sudan, confirmed that many people have been relocated from the reception camp in Hamdayet to Um Rakuba and Tan Rakuba, with about 1,000 still at the reception center. The number of those in the Hamdayet villages and markets who did not come in through the transit center is unclear.

Although UNHCR guidelines allow refugees to stay in transit centers for no more than 72 hours, some refugees have stayed in the reception center for months.

But as so many people walk into the transit center, it is difficult if not impossible to provide for them all. That led to some unrest, in the form of demonstrations.

“The inability to provide for their basic needs is what leads to the demonstrations that took place for a couple of days. There was not enough food, and what was provided was nutritionally deficient,” said Dangelser. The lack of food was so dire that some people chose to go back to the Ethiopian side of the border to find food rather than starve at the transit reception center.

“There is a serious concern with relocation with the rainy season approaching,” said Dangelser. “The buses may have trouble moving due to poor road network and wet desert soil.”

One Ethiopian refugee, the mother of a 9-month-old baby, told of taking the child to her weekly checkup in the nutrition ward at the MSF clinic in the Al Tanideba camp.

“[The baby] doesn’t eat, and when she does, she throws up everything. When we were in Al Hashaba, we went to the MSF clinic several times. They gave her various treatments, but none of them worked. I’m concerned about her because her health condition is deteriorating. She was 7.5 kg (16.5 pounds), now she is 6.6 kg (14.5 pounds),” said her mother, who did not want to be named for security reasons.

She said her family of nine does not get enough food, only bread, and oil.

“The only time we had something different was when we were in Al Hashaba. They distributed rice and wheat, they gave us 5 kg of each. Unfortunately, Selemawit’s [the baby’s] twin brother is also malnourished. I don’t have enough milk to lactate them. The thought of losing her frightens me,” she said. “I hope the treatment they give me at the Al Tanideba MSF clinic works for her works this time.”

An MSF nutrition assistant at the site said, “Selemawit has severe acute malnutrition …. We supplement her feeding with therapeutic food and plumply nuts and monitor her every week to ensure she’s putting on weight. Generally, babies with severe malnutrition are at higher risks of infection …. Without appropriate and timely management, children who are severely malnourished can develop serious medical complications.”

In Um Rakuba, MSF runs a clinic that provides medical consultations, screenings for signs of malnutrition, and assistance for those with non-communicable diseases such as hypertension and diabetes.

Other issues at the center

“Initially the lack of shelter and supplies for refugees contributed to a majority not using the transit reception center, which is in the desert with no shade,” Dangelser said.

The registration process is slower there, he said, due to the high volume of people arriving. Cultural relations among the neighboring communities in the two countries have made it challenging to trace some of the refugees who already entered Sudan and are hosted by families and friends in the market and communities.

“To avoid a repeat of the demonstrations, UNICEF and other actors have dug a water well to supply water in all the camps and arrange to provide enough nutritious food,” said Dangelser.

The refugees commonly struggle with psychological issues from civil unrest, home abandonment, and family separations issues, to name a few, he said. MSF provides healthcare, primarily for conditions related to malnutrition, respiratory tract infections, Covid-19, maternal care, and mental health cases. He said the clinic does about 300 consultations per day.