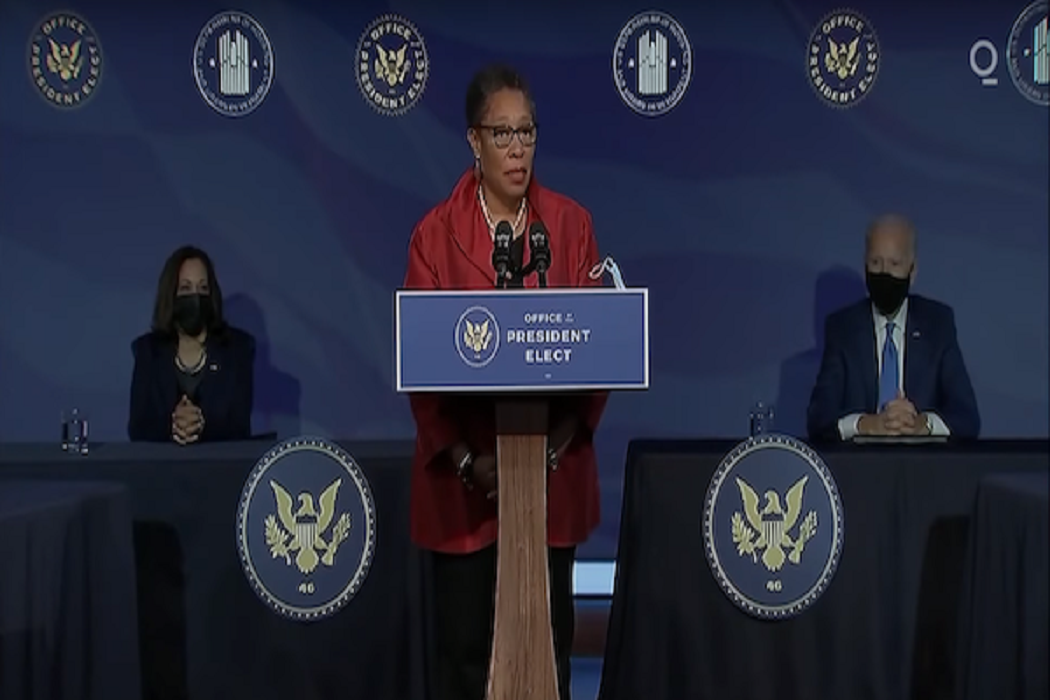 The selection of California Sen. Kamala Harris to join the Democratic ticket and then win the nation’s vice presidency gave unprecedented hope to Black women across the nation. Not only had a woman broken a glass ceiling in professional development; she was also Black and a graduate of Howard University, one of the nation’s premier historically Black institutions.

In recent days, however, two other significant nominations by President-Elect Joe Biden signal that the presence of Black women in the new administration is expanding in other ground-breaking roles. If confirmed by the Senate, Cecilia Rouse, a renowned economist, will become the first Black woman to chair the nation’s Council of Economic Advisers (CEA), and Ohio’s Rep. Marcia Fudge, a former chair of the Congressional Black Caucus, will become the second Black woman in 40 years to lead the Department of Housing and Urban Development (HUD).

Never before in the nation’s history have three Black women served in these three key posts. Moreover, as Black America seeks more fairness, inclusion, and equity with a new White House, these appointees are well-respected and ably qualified to serve in their respective roles.

Nominated on Nov. 30 to serve as CEA’s chair, Cecilia Rouse is the dean of the Princeton School of Public and International Affairs (SPIA), and a former CEA member during the Obama administration. Earlier, she served as a special assistant to President Bill Clinton on his National Economic Council.

As the Ivy League school’s Katzman-Ernst Professor in Economics and Education and public affairs, she is also the founding director of the Princeton Education Research Section, a member of the National Academy of Education and the Brookings Institution, and a member of the editorial board of the American Economic Journal, focusing on economic policy.

Rouse joined Princeton in 1992, after earning her undergraduate and Ph.D. degrees in economics from Harvard University, and has led SPIA since 2012.

Princeton’s president offered his best wishes for her new role.

“Ceci Rouse is a distinguished economist and an outstanding dean for the school,” said Christopher L. Eisgruber, Princeton University’s president. “For more than eight years she has led the School of Public and International Affairs with integrity and a steadfast commitment to scholarly excellence, diversity, and the free exchange of ideas. The school is stronger and better because of her contributions.”

“I am proud that she has once again been called to serve our country, this time in one of its most important leadership roles,” added Eisgruber.

In a recent Twitter post, Rouse wrote, “This job is about advising the president on how to rebuild and revive our economy. The planning for a fairer economy, grounded in facts and evidence, begins now.”

Similarly, on Dec. 11, Biden nominated Ohio’s Rep. Marcia Fudge to lead HUD. Also subject to Senate confirmation, Fudge will lead housing efforts to make bold investments in homeownership and access to affordable housing for low-income consumers, many of whom are Black, brown and native families, according to the Biden-Harris transition team. This effort will also mirror the overarching Biden-Harris pledge to create an economy “where Black, Latino, Asian American and Pacific Islander (AAPI), and Native American workers and families are finally welcomed as full participants.”

In her Dec. 11 remarks, Fudge reflected on the responsibilities she would assume as HUD secretary.

“Our task at the Department of Housing and Urban Development will be to stand up for the dignity of all Americans and deliver the promise of our nation to all those left out in the cold … We will fight for housing in every community that is affordable, decent and safe. We will help more Americans secure the dream of homeownership, to close the gaps of inequity, build wealth, and pass it onto their children … But perhaps most importantly of all, we will help people believe once again that their government cares about them no matter who they are. That we understand their problems.”

Elected to Congress in 2008, Fudge has represented Ohio’s 11th District that includes 32 cities, suburbs, and towns in Ohio’s Cuyahoga and Summit counties, including Cleveland, Akron, and Euclid.

Prior to her election to Congress, she served in the Cuyahoga County Prosecutor’s Office and broke racial and gender barriers as the mayor of Warrensville Heights. As mayor, she focused on revitalizing both a sagging retail base and new residential construction.

A lawyer by training, Fudge is a graduate of Cleveland State University’s Cleveland-Marshall School of Law, and earlier earned her bachelor’s degree in business from Ohio State University. She is a past national president of Delta Sigma Theta Sorority, Inc., and a member of its Greater Cleveland Alumnae Chapter.

Numerous housing stakeholders expressed support for the Fudge nomination, including top industry leaders like the Mortgage Bankers Association and the National Association of Home Builders. This corporate support is matched by that of lawmakers, consumers, and affordable housing advocates as well.

“An unflagging advocate for civil rights, Fudge brings decades of experience as a public servant and a strong commitment to ensuring equitable access to credit, education, healthy food, clean environments, and other resources, which go hand-in-hand with access to housing,” said Lisa Rice, president, and CEO of the National Fair Housing Alliance.

“Having served as mayor of Warrensville Heights, Ohio, Fudge will bring a unique understanding of how HUD programs are implemented on the ground locally,” Rice said. “We are further encouraged by the incoming administration’s indication that its Day One priorities for HUD will include reinstating the 2015 Affirmatively Furthering Fair Housing and 2013 Disparate Impact rules.”

Sharing that same concern on the Trump-era HUD rollbacks and the future of the Fair Housing Act is Nikitra Bailey, an executive vice president with the Center for Responsible Lending (CRL).

“The 2015 AFFH rule was a step toward fulfilling that law’s mandate of breaking down segregation and the inequity it created. In quashing the rule, the Trump administration has taken our nation backward, denying people the freedom to choose where they live and exacerbating the issues that we struggle with as our nation reckons with racial injustice today,” said Bailey.

“The administration should reverse this action and take the necessary steps to ensure that all people, including Black Americans, can fairly participate in the American Dream.”

Following the 1968 enactment of the Fair Housing Act, Black America’s rate of homeownership grew consistently until 2007 and the disproportionate foreclosures borne by Black and brown consumers. By 2019, only 40.6% of Blacks were homeowners, a record low. Even in 2020 with a Black homeownership rate of 44%, Black America lags behind other races and ethnicities. By comparison, white homeownership stands at 73.7%, according to the Census Bureau.

These low rates of homeownership are a significant part of why racial wealth gaps continue to grow. For the average person, a home is the largest single investment of a lifetime, bringing not only stability for families but the opportunity to build wealth through equity and inter-generational transfers of wealth.

CRL’s federal policy agenda for Biden’s first 100 days in office addresses both legislative and administrative remedies for housing. A new HUD secretary could enact several of these items, including but not limited to full enforcement of fair housing and lending laws, requiring financial institutions to fulfill their Community Reinvestment Act mission that targets low- and moderate-income consumers, and creating a homeownership program that provides down payment assistance grants for those now underserved in the housing market — low-income, Black, Latino and other communities of color.

“According to recent reports, $70 billion in back rent will be due by the end of the year and 20 million renters could face eviction by January 2021, while 2.8 million homeowners are in forbearance and 3.8 million are estimated to be in some stage of delinquency,” Waters said. “It is clear that in order to meet the scale and scope of this crisis, swift action must be taken.”

“The last four years consisted of a Trump administration intent on doing everything in its power to diminish, rather than promote, fair access to housing; rescind, rather than strengthen, bedrock rules that prevent discrimination in housing; and ignore, rather than address, the housing and homelessness crisis our country faces amid an unprecedented global pandemic,” Waters concluded.